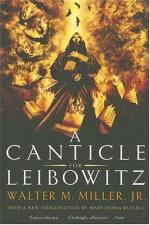 A Canticle for Leibowitz Quiz | Eight Week Quiz B

1. What confession prompts Cheroki to withhold absolution from Francis?
(a) Francis' temptation to eat the pilgrim's food
(b) Francis' story about finding the relics
(c) Francis' failure to finish his shelter
(d) Francis' altercation with the pilgrim

3. What does Brother Francis at first believe is in the hole?
(a) an animal
(b) treasure
(c) the remains of Blessed Leibowitz
(d) a scroll

4. What term for the unlearned do the people of the Simplification embrace as a complimentary term?
(a) simpleton
(b) ignoramous
(c) dunce
(d) bonehead

1. What does Francis speculate that the stain on the blueprint might be?

2. How does Francis respond to being hit by the Abbot?

3. Why does Arkos let Francis take his vows in the Albertine Order of Leibowitz?

4. What reason does the Abbot give for disbelieving the story of the pilgrim?

5. What does the Abbot do with the fallout shelter?

A Canticle for Leibowitz from BookRags. (c)2021 BookRags, Inc. All rights reserved.