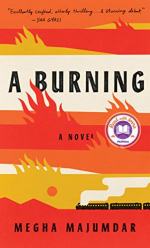 Megha Majumdar
This set of Lesson Plans consists of approximately 128 pages of tests, essay questions, lessons, and other teaching materials.

2. Which Hijra was locked up for reporting police harassment?
(a) Norini.
(b) Principa.
(c) Laddoo.
(d) Ragini.

1. What does the reporter who comes to see Jivan bring for her in Part II?

2. What does PT Sir eat with Bimala Pal during his first meal with her in Part II?

3. Who comes to PT Sir's school on Republic Day?

4. What kind of work did Jivan's father once do?

5. Which famous film producer is brought in to Jivan's prison?

More summaries and resources for teaching or studying A Burning.

A Burning from BookRags. (c)2021 BookRags, Inc. All rights reserved.