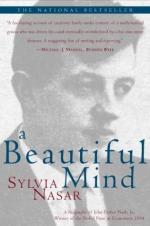 Sylvia Nasar
This set of Lesson Plans consists of approximately 123 pages of tests, essay questions, lessons, and other teaching materials.

This quiz consists of 5 multiple choice and 5 short answer questions through Chapters 33 - 35.

4. How many faculty members from MIT belonged to a Communist Party cell and were called to testify before the House Un-American Activities Committee, as described in Chapter Nineteen?
(a) Seven.
(b) Two.
(c) Eleven.
(d) Three.

5. What institution was interested in Nash in Chapter Thirty-Three, although he applied for grant money for a sabbatical to work on research at Princeton and in Paris?
(a) Antioch College.
(b) Bluefield College.
(c) Harvard University.
(d) The University of Chicago.

1. Who did the Republic of Korea fight in the Korean War?

3. When did Jürgen Moser die?

4. When did Joseph McCarthy die?

5. Alicia's family had been prominent and wealthy where, as described in Chapter Twenty-Six?

More summaries and resources for teaching or studying A Beautiful Mind: A Biography of John Forbes Nash, Jr., Winner of the Nobel Prize in Economics, 1994.

A Beautiful Mind: A Biography of John Forbes Nash, Jr., Winner of the Nobel Prize in Economics, 1994 from BookRags. (c)2021 BookRags, Inc. All rights reserved.