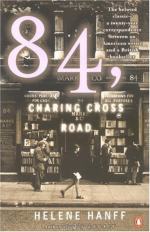 • 84, Charing Cross Road is Helene Hanff's collection of correspondence chronicling her long-distance friendships with the employees of a secondhand bookstore.

• The letters from Helene in New York City to the bookstore in London, England, span the time of twenty years, October 1949 through October 1969.

• Helene Hanff writes to the proprietors of the Marks & Co. bookstore in London, England, on October 5, 1949, in response to their advertisement in a literature review publication.

• The bookstore has advertised their services as "antiquarian booksellers," a term which slightly frightens Helene, but she presses on with her requests for secondhand books.

• Helene receives her first letter from Marks & Co. and the writer signs off only with the initials FPD.

• Helene responds a few weeks later that the books have arrived, and one in particular is too beautifully bound to sit on her orange-crate bookshelves.

• The next books on their way to Helene are...