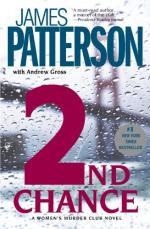 This quiz consists of 5 multiple choice and 5 short answer questions through Part III: The Blue Wall of Silence.

1. What news does Lorraine give Lindsay in chapter nineteen?
(a) They have an eye witness that has come in.
(b) They have found the van.
(c) There has been another killing.
(d) Someone has confessed to the murders.

2. What is Lindsay told when she arrives at the scene in chapter thirty-two?
(a) Davidson was lured there.
(b) The killer called in after killing Davidson.
(c) There is nothing left of Davidson's body.
(d) They aren't sure what happened.

3. What is found during the autopsy of the elderly black woman that leads Cindy to believe the woman did not commit suicide?
(a) Blood and skin under her fingernails.
(b) Poison in her system.
(c) A head wound.
(d) Bruises down her back in the shape of shoes.

4. What does Lindsay tell Coombs as they leave his apartment in chapter eighty-four?
(a) He is considered a murder witness.
(b) He is in a lot of trouble.
(c) They have his shoe print.
(d) He has been seen at the murder scenes.

5. What does Charlie tell Lindsay that they did find at Davidson's murder scene?
(a) Flour.
(b) Chalk.
(c) A piece of chewing gum.
(d) A pair of glasses.

1. What does Lindsay say to tell Mercer in chapter twelve when someone says that he is looking for her?

2. What does Jacobi tell Lindsay when he calls her from the Blue Parrot?

3. What did the killer take a picture of that he is adding to his book in chapter eighteen?

4. What does Lindsay say when Claire tells her to send over Estelle's autopsy file?

5. What does the sign say above the building that the killer goes into in chapter twenty-five?