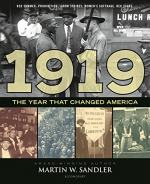 1919 The Year That Changed America Quiz | Eight Week Quiz A

This quiz consists of 5 multiple choice and 5 short answer questions through Introduction and Chapter 1: An Amazing Event.

3. What job was Royal Albert Leeman performing when he helped avoid a greater death toll than the Great Molasses Flood had already caused?
(a) Surgeon.
(b) Brakeman.
(c) Engineer.
(d) Auto mechanic.

4. Before Ogden ruled that USIA would be held financially responsible for the harm it caused to victims of the flood, how many other corporations had been deemed liable for their actions in such a way?
(a) 0.
(b) 3.
(c) 1.
(d) 9.

5. What job did the man have who ended up being tossed into the harbor after narrowly escaping other perils in the Great Molasses Flood?
(a) Blacksmith.
(b) Cook.
(c) Barrel-maker.
(d) Auto mechanic.

1. Around what time of day did the Great Molasses Flood commence?

2. What kind of establishment did Martin Clougherty own in the North End of Boston?

3. How many feet high was the container that held the raw molasses involved in the Great Molasses Flood?

4. The construction of the container owned by USIA "was overseen by" (13) what type of person, rather than an engineer?

5. World War I began in July of which year?

1919 The Year That Changed America from BookRags. (c)2021 BookRags, Inc. All rights reserved.