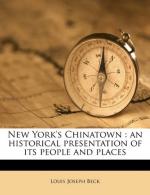 This Study Guide consists of approximately 53 pages of chapter summaries, quotes, character analysis, themes, and more - everything you need to sharpen your knowledge of Imperial China 617-1644.

Official. The son of a high-ranking official, Su Song successfully passed his Jinshi degree examination and was offered a post in the Imperial Library in 1053. In 1057 the Song court appointed him to revise the medical classics. By 1062 he revised and enlarged a massive work on pharmacology and natural history in China.

Minister of Justice. After having served for nine years in the Imperial Library, Su Song accepted a position in local government in order to improve his family's economic situation. He was, however, unable to work his way up in the central administration because he and other conservative officials did not like Wang Anshi's reforms. He served as envoy to the Khitan state Liao and governor of the capital of Kaifeng in 1078. He was demoted for a short time because a member of his staff had failed in certain assignments. However, he eventually became...