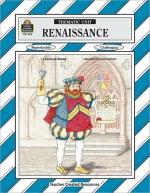 This Study Guide consists of approximately 17 pages of chapter summaries, quotes, character analysis, themes, and more - everything you need to sharpen your knowledge of European Renaissance and Reformation 1350-1600.

Murad III, the son of Selim II, becomes the sultan of the Ottomans.

Hindu poet Tulsidas writes Ramcaritmanas (Lake of the Acts of Rama), one of the greatest Hindi literary works.

The Spanish are pushed out of Tunis by the Turks. While the Spanish are losing in Tunis, they are establishing a settlement in Angola.

European Renaissance and Reformation 1350-1600: World Events from Gale. ©2005-2006 Thomson Gale, a part of the Thomson Corporation. All rights reserved.