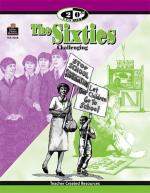 This Study Guide consists of approximately 54 pages of chapter summaries, quotes, character analysis, themes, and more - everything you need to sharpen your knowledge of America 1960-1969.

In the media, if not in other segments of American life, the 1960s were a decade of consolidation, not revolution. After the radical change brought about by television in the 1950s, the next decade was consumed with evolutionary change as television and radio broadcasters, newspaper and magazine publishers, and the general public attempted to come to terms with the revolution they had made in the previous decade.

The television industry saw two new technological wrinkles come into widespread use, but neither was a new idea. By the end of the decade the majority of programs were broadcast in color, even if in 1967 only 15 percent of American homes were equipped with color television. UHF-band broadcasting was also given the regulatory go-ahead, though it was still looked down upon as a poor substitute for VHF broadcasting.

Whatever the technical format...

More summaries and resources for teaching or studying America 1960-1969: Media.