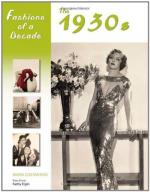 This Study Guide consists of approximately 54 pages of chapter summaries, quotes, character analysis, themes, and more - everything you need to sharpen your knowledge of America 1930-1939.

Throughout the 1940s King continued to design for Hollywood, and in 1940 she abruptly closed her high-priced salon, claiming it was too elitist. She began working on a series of dress-design patterns for a women's magazine, offering quality patterns to women who could not afford her originals. In 1943 she designed Flying Fortress Fashions for women workers in the aircraft industry, which workers and critics adored.

More summaries and resources for teaching or studying America 1930-1939: Fashion.