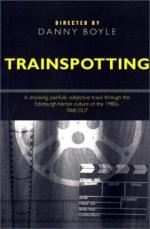 Mark Renton is a smart young man with a major drug problem. Renton is addicted to heroin and totally immersed in Edinburgh, Scotland's, underground drug culture. Renton crashes in a small, untidy apartment with his friends, all of whom live in anticipation of their next hit. They go out at night to clubs, but for the most part, their everyday lives revolve around their drug use.

Finally, after meeting a young girl, Diane, whom he likes and experiencing the trauma of a neglected baby dying in his apartment, Renton begins to get help with his addiction. His parents care for him during his illness from heroin withdrawal and their strict supervision finally allows him to get sober. However, after Renton moves to London for a fresh start, his friends find him and drag him into a big drug deal they are trying to...