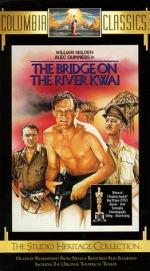 The Bridge on the River Kwai Film Summary & Analysis

David Lean
This Study Guide consists of approximately 24 pages of chapter summaries, quotes, character analysis, themes, and more - everything you need to sharpen your knowledge of The Bridge on the River Kwai.

Shears is an American Navy man whose ship sunk along the Japanese coast. He impersonates an officer by wearing the uniform of an officer who had died. He did this so that the enemy would treat him better. The British in the camp believe he has a bad attitude because he is simply waiting to escape rather than trying to make the best of the situation.

Colonel Nicholson especially doesn't trust Shears and believes that Shears is lazy. When Shears and two other men try to escape, they are shot and presumably killed. Shears actually does survive, however, and he makes it to Ceylon with the help of some of the natives.

While in Ceylon, the British figure out Shears's true identity, and the Navy turns him over to their control. Thus, Shears must help lead a mission back to the camp so...

More summaries and resources for teaching or studying The Bridge on the River Kwai.

The Bridge on the River Kwai from BookRags. (c)2021 BookRags, Inc. All rights reserved.