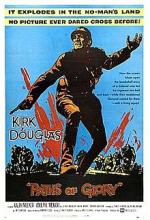 Stanley Kubrick
This Study Guide consists of approximately 22 pages of chapter summaries, quotes, character analysis, themes, and more - everything you need to sharpen your knowledge of Paths of Glory.

Paths of Glory is an intense war film that asks tough questions. When the military makes the terrible mistake to go ahead with an impossible mission and risk so many lives, the men are the ones who pay. Six are executed for the mission's failure.

Tough questions must be asked, as viewers watch the events unfold: Who should be held accountable for these decisions? Why are the men murdered? Why has Dax been ignored as he tries to stop the mission and represent the men?

The actors in this film are exceptional. Kirk Douglas does an excellent job playing the part of the brave Col. Dax, who stands up for what he believes. Douglas pulls off this fiery role and brings life to the film with his portrayal. He truly carries the movie and brings it to life.

More summaries and resources for teaching or studying Paths of Glory.