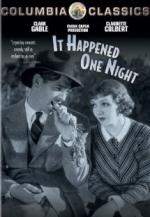 During each night Ellie and Peter spend together, Peter hangs a curtain between their beds so that they can have some privacy. Although he does not make this plan at first, he does it so that Ellie will feel more comfortable with the situation. Not only does the curtain give the characters their privacy, but also it serves as a wall between them both physically and emotionally.

Throughout their journey, the two become closer as they struggle to get back to New York without having Ellie recognized by the detectives, fellow passengers, or police. When they are finally just a short way from New York, Ellie decides that she doesn't want to get into New York in the middle of the night. More than concern for her family, Ellie is not ready to leave Peter yet.

As they talk this night, Peter describes the type of woman he...