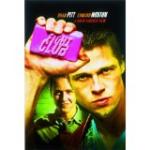 David Fincher
This Study Guide consists of approximately 27 pages of chapter summaries, quotes, character analysis, themes, and more - everything you need to sharpen your knowledge of Fight Club.

The Narrator, played by Edward Norton

The Narrator tells us the story of Fight Club. He is a lonely man who hates his job and has joined support groups to have a social life. At first, the Narrator is a helpless man who blames all his problems on others.

One day, the Narrator meets Tyler Durden on an airplane, and his entire life begins to change. After they start Fight Club, the Narrator begins to develop a sense of purpose in life and finds that he is motivated by this new group.

When things begin to change, though, the unnamed Narrator becomes concerned and tries to stop Tyler and his anarchistic plans. As the Narrator tries to stop the bombings, he discovers that Tyler is not a real person - he is simply a figment of the Narrator's own imagination that he has created to excuse his own...