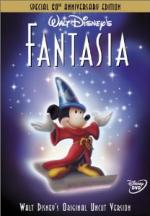 This Study Guide consists of approximately 19 pages of chapter summaries, quotes, character analysis, themes, and more - everything you need to sharpen your knowledge of Fantasia.

Deems Taylor, played by Himself

Deems Taylor is the narrator for Fantasia. Unlike most animated movies, Fantasia uses a narrator throughout the film to lead the audience to conclusions and explain what is happening in the film. Since Walt Disney created a film entirely based on making pictures out of music, extra explanations are needed so that the audience can understand the techniques and purposes of the artists.

Famous for his work as a composer, Taylor seemed to be the perfect pick for a narrator for Disney's Fantasia. Taylor had created some of his own musicals and compositions, and he was the intermission commentator for the New York Philharmonic. With his deep voice and straightforward manner, Taylor creates an atmosphere of interest in a film that could have easily been confusing for audiences.

Taylor uses his knowledge of music to help guide the audience into their experiences...

More summaries and resources for teaching or studying Fantasia.