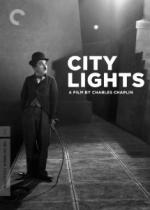 Charlie Chaplin
This Study Guide consists of approximately 27 pages of chapter summaries, quotes, character analysis, themes, and more - everything you need to sharpen your knowledge of City Lights.

Describe the character of the Tramp, physically and emotionally.

How is the Tramp different after serving his sentence in jail for robbery and how is this obvious?

How does the Tramp act as a savior in the film? Who does he save and why?

Why does the girl assume the Tramp is a millionaire?

Describe the ending of the film. Does the girl finally accept the Tramp for who he really is? Does she reject him? How are they both affected by this final revelation?

Describe the role blindness plays in the film.

Describe the different ways the Tramp is persecuted in the movie and made to feel inferior.

Describe the use of society, social classes, and prejudice in the film.

Compare and contrast silent films as opposed to talking films.

Explain, using specific examples from the film, how the movie reflects the time in which...

More summaries and resources for teaching or studying City Lights.