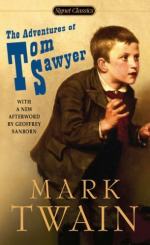 Mark Twain
This student essay consists of approximately 4 pages of analysis of Character Traits of Tom Sawyer in "The Adventures of Tom Sawyer".

I think the best example of Tom showing adventurousness is when he and Huckleberry go to the cemetery and see Injun Joe. It is very adventurous to go to a cemetery at night because they could have seen anyone or anything. They could have been killed, but Tom was adventurous enough to go there.

Another example of how Tom...

More summaries and resources for teaching or studying The Adventures of Tom Sawyer.