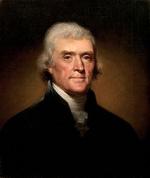 Get Was Thomas Jefferson Consistently Inconsistent? from Amazon.com
View the Study Pack

This student essay consists of approximately 3 pages of analysis of Was Thomas Jefferson Consistently Inconsistent?.

Summary: Many considered Thomas Jefferson to be a man who was consistently inconsistent. A strict constructionist with regard to the Constitution, and a strong advocate of states' rights, Jefferson as president nevertheless abandoned the principles of his own Democratic-Republican party in order to gain a more realistic perspective on a situation in order to solve it.
Thomas Jefferson is one of our most gifted founding fathers. He was an open-minded Virginian and a strict constructionist meaning he always sought for a literally interpretation of the Constitution. He held the political principles of the Democrat-Republican party and was a strong advocate of states' rights. During his presidency, many situations forced Jefferson to abandon his true Democrat-Republican morals and make decisions that would make him seem as a hypocrite. Therefore, many considered Jefferson as a man who was consistently inconsistent.

A prominent example of Jefferson's inconsistency is his decision to keep the established Bank of the United States. The idea of creating this bank was that of Alexander Hamilton, a federalist and "loose" constructionist. Jefferson, a "strict" constructionist, absolutely opposed the idea of such a bank declaring that it was unconstitutional. Jefferson stated that the Constitution authorized all powers not granted to the central government were...

More summaries and resources for teaching or studying Thomas Jefferson.