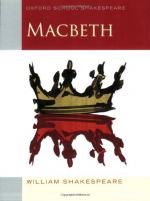 Get The Tragic Hero of Macbeth from Amazon.com
View the Study Pack
View the Lesson Plans
Related Topics
The Winter's Tale
Venus and Adonis

William Shakespeare
This student essay consists of approximately 2 pages of analysis of The Tragic Hero of Macbeth.

The Tragic Hero of Macbeth

In Macbeth, the tragic hero is none other than Macbeth himself. At the start of the play we see Macbeth, the hero, fighting battle against Macdonowald, the thane of Cawador whom has betrayed the king. Macbeth does a noble deed by killing Macdonowald and is rewarded by king Duncan and receives the title of "thane of Cawador." It is obvious in act one that Macbeth is well favored by the king and a "good guy" in general giving the audience the impression that Macbeth is a good, noble, and well respected man.

However later on towards act two we discover Macbeths flaw. Ambition, normally a good trait is used by Macbeth in excess and later in the story becomes his downfall. This ambition Macbeth has is what leads to his killing of king Duncan and his guards. Eventually this continues on until Macbeth kills everyone close to him. (With the exclusion of Lady Macbeth who goes insane and kills herself.)

Slowly as the story progresses we watch Macbeth change from the hero of the play into a more "villainous" tragic hero. He is going crazy with power and is setting up his own downfall. He is aware of the army being razed against him but doesn't care, additionally he is the king and much is at stake. Towards the end of the story he realizes the mistake he made when he murdered Duncan thus completing the traits that make a tragic hero.

Thus, due to his ambitious characteristics Macbeth fulfills all the requirements that make a tragic hero. He is moral and noble at the beginning of the story yet his tragic flaw, ambition, causes him to murder Duncan and become the terrible tyrant we see at the end of the story. In the end, Macbeth was no more than "a walking shadow, a poor player that struts and frets his hour upon the stage and then was heard no more", a simple tragic hero overwhelmed by the ambition which caused his rise and his fall.

The Tragic Hero of Macbeth from BookRags. (c)2022 BookRags, Inc. All rights reserved.