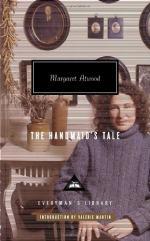 Get Ignorance Is Misery from Amazon.com
View the Study Pack
View the Lesson Plans
Related Topics
The Heart Goes Last
Stone Mattress: Nine Tales
The Year of the Flood
MaddAddam
Hag-Seed
The Penelopiad
The Testaments: The Sequel to The Handmaid's Tale
Dearly

Margaret Atwood
This student essay consists of approximately 6 pages of analysis of Ignorance Is Misery.

Summary: A comparison of the novel The Handmaid's Tale by Margaret Atwood and the play "Tartuffe" by Moliére. Both pieces of writing use the theme of irony to undercut societal ignorance, revealing that making false assumptions or being too overconfident can lead to fatal consequences that ultimately show a lack of intelligence. In doing so, both authors intended to show that one's character should be judged not on the basis of their religion, social status, gender, or rank, but rather on what one has done to benefit society as a whole.
Lauren Bedard

In the novel, The Handmaid's Tale, and the play, Tartuffe, written by Margaret Atwood and Moliére respectively, the theme of irony is used to undercut societal ignorance. The theme of irony also reflects the idea that things are not always what they seem to be.

In The Handmaid's Tale there are specific scenes in which characters make false assumptions that lead to serious consequences later. In the novel The Handmaid's Tale, Offred makes the assumption that the words "Nolite te bastardes carborundorum" are a sign of hope for her in the form of a message from someone who lived there before her. After discovering the message for the first time, she says, "It was a message, and it was in writing, forbidden by that very fact, and it hadn't yet been discovered. Except by me, for whom it was intended. It was...