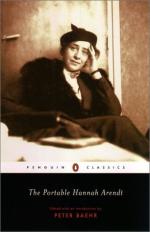 Get A Closer Look Into the "Banality of Evil" from Amazon.com
View the Study Pack
Related Topics
Ideology and Terror

This student essay consists of approximately 2 pages of analysis of A Closer Look Into the "Banality of Evil".

A Closer Look Into the "Banality of Evil"

Summary: A brief analysis of Hannah Arendt's book Eichmann in Jerusalem, including further exploration of the meaning behind the concept of the "banality of evil."
Hannah Arendt's Eichmann in Jerusalem attempts to redefine the concept of evil as it exists in our society. The author uses Adolf Eichmann to build on her fascinating yet problematic argument concerning the dullness of wrongdoing. For those who don't know, Eichmann is regarded as the mastermind behind the actual Holocaust. He coordinated the deportation of hundreds upon thousands of Jews to concentration camps. From a harsher perspective though, he is essentially responsible for sending these people away to be slaughtered. As a devout member of the Nazi party, Eichmann was strongly devoted to his job, a position he was honored to have. Ultimately, in the aftermath of WWII, the remaining members of the Nazi party were captured and tried in the notorious Nuremberg Trial. Eichmann, on the other hand, had fled the country for Argentina where he eventually turned himself in. He then faced a very tough trial.

The concept of evil's banality was first explored in Eichmann's trial, during which he exuded much of the behavior that led Arendt to her conclusion. When on the stand, Eichmann never expressed guilt for his acts. Instead, he explained that he had followed orders and never considered the impact of his actions, a feeling he still demonstrated while on trial. While Eichmann's inability to show remorse seemed to strengthen the prosecutions case that he was in fact a " sadistic monster", there is a disturbing amount of evidence to contradict this claim. Arendt notes that nearly a half-dozen psychiatrists found Eichmann to be a perfectly normal being, void of any inbred hatred of Jews.

Based on the following evidence, Arendt begins to develop an explanation for Eichmann's case. The core of her argument rests on the belief that Adolf Eichmann lacked the faculty to think reasonably and morally about the effect of his actions. In other words, he was not an Anti-Semitic and he did not champion violence or killing. If none of these are true, we might be tempted to conclude that Eichmann was actually a harmless individual. On the contrary, Eichmann's incompetence allowed him to behave in such a manner, which is something Arendt believes we are all dangerously capable of doing.

More summaries and resources for teaching or studying Hannah Arendt.

A Closer Look Into the "Banality of Evil" from BookRags. (c)2022 BookRags, Inc. All rights reserved.