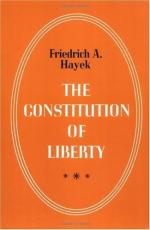 Get Four Principles of the U.S. Constitution from Amazon.com
View the Study Pack

United States
This student essay consists of approximately 6 pages of analysis of Four Principles of the U.S. Constitution.

Four Principles of the U.S. Constitution

In the USA and in each of the fifty states, the most basic fundamental is a constitution, which is a relatively simple document and is the self-designated supreme law of the land. As the supreme law of the land, Constitutional Law texts are generally divided into two parts. The first part is about the allocation of powers. This entails two basic principles of American Constitution:separation of powers and division of powers. The former one discusses the interaction among the three constituent elements of national goverment, while the latter one refers to the extent of power possessing by the federal goverment and specification of states' power. Both of the two principles function under one principle----checks and balances. The second part of the Constitution is on the specification of rights and liberties for the individuals. To realize the rights and liberties, the...