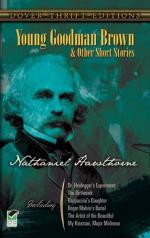 Get Symbols and Meanings in "Young Goodman Brown" from Amazon.com
View the Study Pack
View the Lesson Plans
Related Topics
The Birth-Mark
The Great Stone Face (BookRags)
The Wedding-Knell

Nathaniel Hawthorne
This student essay consists of approximately 5 pages of analysis of Symbols and Meanings in &quot;Young Goodman Brown&quot;.

Summary: Hawthorne used many symbols in his story "Young Goodman Brown" to convey the message that evil is the nature of all humankind, contrary to what most perceive as mankind is usually good at heart. While using those symbols, Hawthorne gets his point across by more than just using plot or themes, but rather taking his opinions to another level of literary elements.
Symbols in literary works are usually provided as a way to suggest a more complex meaning or a broad range or meanings, aside from the literal meaning of the symbol. In Nathaniel Hawthorne's short story "Young Goodman Brown," Hawthorne uses a broad range of symbols that mean more than just their literal meaning. Hawthorne uses those symbols to promote his underlining message of evil, and how every man has traces of evil within him.

"Young Goodman Brown" is a short story by the nineteenth-century American fiction writer Nathaniel Hawthorne based on the history of Hawthorne's Puritan ancestors and the New England that existed during his time. Hawthorne documented Puritan lifestyle in a few of his stories, such as The Scarlet Letter and The House of Seven Gables. One of his best-known stories is "Young Goodman Brown", which tells the story of a young, devout Puritan named Goodman Brown...