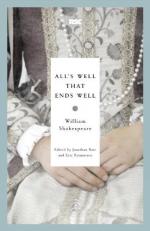 Get "All's Well That Ends Well" from Amazon.com
View the Study Pack
Related Topics
The Winter's Tale
Venus and Adonis

Summary: This is a review of the Actor's Shakespeare Project production of William Shakespeare's play "All's Well That Ends Well," performed on April 23, 2006.
On April 23, of 2006, I traveled in to Boston to watch the Actor's Shakespeare's Project and their rendition of "All's Well That Ends Well." Going in with a weeks worth of previous knowledge on the play, I had very high hopes. Sadly, after sitting through a long and awkward three hours, I was able to leave with an only slightly more in-depth knowledge of the show.

The major difference that I noticed between the play and the performance is how I directly related and felt towards many of the characters. For instance, while reading the play, I felt very uncomfortable towards Helena and many of the actions she took. When, in the play, she goes and finds out that Diana has been courted by Bertram, and then convinces them to go along with her seemingly foolish plan, I could not understand how anyone would find that believable or even acceptable. However, when I saw it performed, I actually related so much to Helena that I completely accepted it.

On the other hand, something that made me even more confused after seeing the show was just why Helena loved Bertram so much. When reading the play, I got the feeling that he had always acted very civilly towards her, maybe even on occasion showing some friendly affection, but when the topic of marriage was approached, he quickly rebuffed the idea because of their class differences. This made me think that her continued love for him was understandable, and that she perhaps knew what a good person he was at heart. However, when seeing it performed, I simply could not understand what Helena could see in him. He treated her so poorly from the very beginning, and just became more and more asinine and chauvinistic as the show went on. If someone had flat-out refused to marry me, I feel as though I might lose some interest in them, especially if they then fled the country to get away from me.

All in all, while the show cleared up some questions, it still brought up new ones. I found it so much easier to relate to characters like Helena and Diana, whereas Bertram seemed much colder to me.