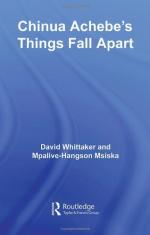 Get "Refugee Mother and Child" from Amazon.com
View the Study Pack
Related Topics
There Was a Country

This student essay consists of approximately 2 pages of analysis of "Refugee Mother and Child".

At the beginning, in the first stanza, the author strikes us by telling us the child will soon die; "for a soon she soon will have to forget." This strong image of a mother and her son is more touching than the "Madonna and Child." The use of alliteration in "a son she soon" reinforces the idea of proximity of death.

The author uses simple and strong vocabulary, giving more emphasis to what is actually said than to the way it is said. This also helps in creating the tragic atmosphere by the use of words such a "diarrhoea" or "dried up ribs" or "washed out bottoms." we can clearly see that the child is suffering from starvation.

"When the poet mentions the "ghost smile", she tries to express that there once was a "smile between her teeth", but now it is slowly disappearing, referring to a ghost, but something still remains, she still remembers or longs for "her mothers pride" .

The fact that "Most mothers there had long ceased to care but not this one" reinforces the idea that she still wants to share time with her son .

A very shocking image used in the poem is the one where the mother combs her son, "as putting flowers in a tiny grave",preparing him for his funeral.

The author expresses the sadness of death by showing the way a mother says goodbye to her son.

More summaries and resources for teaching or studying Chinua Achebe.