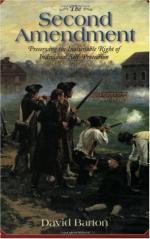 Get Second Amendment from Amazon.com
View the Study Pack

This student essay consists of approximately 4 pages of analysis of Second Amendment.

Summary: The Second Amendment should by all means be removed. Not to defy the freedom of certain Americans, but to protect every American who has the right to live in a safe and prosperous country.
Michael Xia

Bowling for Columbine and the Second Amendment

Ever since the 1500¡¦s, when guns were first introduced, there have been countless nationwide debates about laws regarding both gun ownership and control. One of the biggest changes to gun rights in America is the Second Amendment. The second Amendment allows each and every American to own as many loaded weapons as wished (www.law.cornell.edu). Many people consider it pure insanity to allow such a diversely segregated society to carry assault weapons while other people such as the Members of the NRA consider it more of a duty or hobby.

The NRA are not a group of violent nuts as portrayed in Michael Moore¡¦s movie, ¡§Bowling for Columbine¡¨, but more of a center for gun hobbyists. These people openly defy any restraints made to guns in general, such as the Second Amendment...

More summaries and resources for teaching or studying Second Amendment to the United States Constitution.

Second Amendment from Gale. ©2005-2006 Thomson Gale, a part of the Thomson Corporation. All rights reserved.