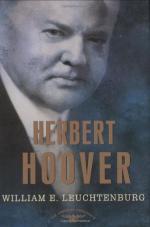 Get Compare and Contrast Herbert Hoover's Policies with Those of Franklin Delano Roosevelt from Amazon.com
View the Study Pack

This student essay consists of approximately 4 pages of analysis of Compare and Contrast Herbert Hoover's Policies with Those of Franklin Delano Roosevelt.

Summary: Hoover's policies were conservative and were made too late in order to be effective. However, the policies that were taken by FDR were implemented at reasonable times, hence were effective. Moreover, the institutions set up by FDR were much better in organization and in resolving important issues such as bank problems and unemployment. Both presidents, however, are closely related, they both were aiming to help get rid of the depression. Both were successful politicians, and both ran office during the depression.
Compare and Contrast Herbert Hoover's policies with those of Franklin Delano Rooselvelt

The economy of the United States began to prosper between the years of 1917 to the 1920's. Factories were built. People got good wages. Employment was broad, thus creating a strong labor force. The stock market was a success and people got rich. American goods were being traded all across the world. Then, suddenly, something hit the United States, and the whole world. A great depression hit the United States.

The crash in the stock market lead to a depression, the greatest the world has faced, thus called the great depression. The term depression means that there was no movement in the economy. Today, historians blame Herbert Roosevelt, president of the United States from 1929 to 1933, and his policies for this economic crash. Herbert Hoover, during the depression, proves how conservative he is in handling the depression, yet...

More summaries and resources for teaching or studying Herbert Hoover.

Compare and Contrast Herbert Hoover's Policies with Those of Franklin Delano Roosevelt from BookRags. (c)2021 BookRags, Inc. All rights reserved.