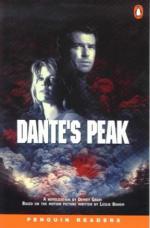 Get Movie Dante's Peak Vs. Volcanos from Amazon.com
View the Study Pack

This student essay consists of approximately 2 pages of analysis of Movie Dante's Peak Vs. Volcanos.

There are three main types of volcanoes, cinder cone, composite and shield. Dante's peak was supposed to be located in the Cascade Mountains and would therefore have to be a composite volcano. The volcano in Dante's Peak displayed qualities from not only a composite cone but also a cinder cone.

One of the main parts that showed that he movie was exaggerated is when "Harry" was crossing the lake and his boat started to dissolve because of the acidity of the water. It is possible that water near and around a volcano to become acidy and dangerous but for the lake to dissolve an aluminum boat would have taken about one week not two minutes.

Another main exaggeration of Dante's Peak was the lava flow. Since Dante's Peak is in the Cascade Mountains it is a composite cone. Composite cones have silica-rich lava, which would enable it to be an Aa lava flow not a Pahoehoe. Pahoehoe lava flows have a low silica content, which allows them to move fast and like a river. Aa, which Dante's Peak should have been, goes slow and covers a small area.

Overall I think the movie Dante's Peak displayed the possibilities of a volcano well. It is hard to nail all of the facts, and except for a few exaggerations most of the events in the movie are possible. This movie displayed the results of a small town that was unprepared for a large event and how it could affect us all.

More summaries and resources for teaching or studying Dante's Peak.