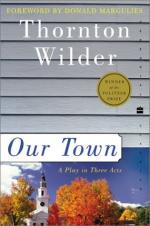 Get A Fork in the Road from Amazon.com
View the Study Pack
View the Lesson Plans

Thornton Wilder
This student essay consists of approximately 2 pages of analysis of A Fork in the Road.

A Fork in the Road

Emily decided to confront George about how his behavior and attitude changed throughout high school because they were good friends. While walking home, Emily told George, ."..It's a fact, you've got awful conceited and stuck up..." George appreciated Emily telling him how she felt. It helped the both of them grow more mature and realize that they both had feelings for each other.

Emily had doubts about marrying George until Mr. Webb came along. She was afraid that George would not love her and stay with her forever. This caused her cold feet before the wedding ceremony. "Sh, you mustn't think of such things. You're just nervous Emily", says Mr. Webb as he reassured Emily that George was a good man. Mr. Webb's words helped Emily commit to marriage.

When Emily passed away, she had the opportunity to look back at the people she left behind. As she watched everyone at her funeral in anguish, Emily said, "They're sort of shut up in little boxes, aren't they?..." Emily probably felt that everyone was "blind" and they do not appreciate life like everyone should. The stage manager gave her the chance to pick a day in the past that she can relive. She chose her twelfth birthday and noticed all the small details of Main Street, such as Mr. Morgan's drugstore, that she did not notice before. After watching everyone pass by life so quickly, including herself, Emily understands the importance of living.

In the beginning of Our Town, Emily was blind to see the transience of life and how we should live it to the fullest while it lasts. Towards the end of the play, it is clear that the decisions Emily made helped her go through and understand the significance of life.

A Fork in the Road from BookRags. (c)2022 BookRags, Inc. All rights reserved.