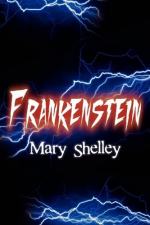 Summary: Shelley, through her tale of Frankenstein, gives reasoning as to why man should not play God. Through the creation and neglect of the monster, Victor has created a deadly force. This ruthless pursuit of knowledge proves dangerous, as Victor's act of creation eventually results in the destruction of everyone dear to him, and his obsessive hatred of the monster drives him to his death.
For as long as science has existed to satisfy man's appetite for knowledge and exploration, there have been people with the belief that science is none other than man's attempt to play God. The 19th century was a time of enlightenment where philosophical thought began and man's concern to better himself in a psychological form developed.

During this time of enlightenment and exploration however, the standards of Christianity and ethical thought challenged science and its moral reasoning. Despite the large progress in society, the church's vast power led the people to fear science. However the church's fear was not just for the salvation of their church, but that science would disprove the proof of God and take God's place in society. For this to happen would bring chaos to society and give little hope to people. The thought of a life without God is daunting to most, and...