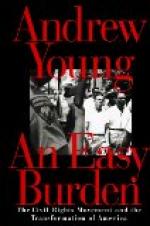 Get Movement ot Militancy in the U.S. Civil Rights Movement from Amazon.com
View the Study Pack

This student essay consists of approximately 2 pages of analysis of Movement ot Militancy in the U.S. Civil Rights Movement.

Summary: Frustration over the progress toward civil rights for African-Americans moved the U.S. civil rights movement from nonviolence to militancy in the 1950s and '60s. Granted rights were thwarted by whites who sought to undermine laws.
The Civil Rights Movement during the 1950's and 60's moved from one of nonviolence to militancy. Frustration over the slow progression of equality using nonviolence, the death of a civil rights leader, and violence persistently acted against demonstrators cause the movement to evolve into a more militant fight.

During one summer deemed Freedom Summer, the Student Nonviolent Coordinating Committee organized bus rides through the heart of the south called Freedom Rides. They started in Washington D.C and were to end in New Orleans, Louisiana. The rides were formed to desegregate interstate travel, especially in the south, and hopefully bring the government's aid into the situation. The African Americans sat in the front or with whites and consequently met heavy resistance in the heart of the south. The buses were torched, bus riders were beaten by mobs of angry white supremacist, and then jailed in state prisons. The riders were halted until the federal government assured the riders of federal protection. The long desired for national spotlight shone on the riders at a costly price: the many people who left hospitalized because of the violence.

Also, the right to vote proved to be a problem for minorities. The 16th Amendment gave the right to vote to all United States citizens. To negate the newly granted power, white supremacists assembled poll taxes, literacy tests, and other obstacles in order to prevent the African Americans from casting their vote. The federal government was slow responding to the minority community's crisis. The federal government had given a right, but failed to enforce it if others prevent one from exercising their rights.

Movement ot Militancy in the U.S. Civil Rights Movement from Gale. ©2005-2006 Thomson Gale, a part of the Thomson Corporation. All rights reserved.