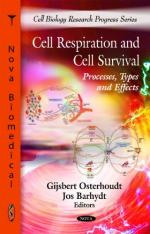 Get Cellular Respiration from Amazon.com
View the Study Pack

This student essay consists of approximately 2 pages of analysis of Cellular Respiration.

If there is no oxygen present after glycolysis, then the next process is fermentation. Fermentation takes the 3-carbon piruvates from glycolysis and adds and electron to them. The result is lactic acid in animals and ethyl alcohol and carbon dioxide from plants, yeast and fungi. Oxygen can then be added back to the lactic acid to form piruvate again.

After glycolysis or after the oxygen is added back to lactic acid from fermentation, the oxidative respiration, also known as the Krebs cycle, takes place. The 3-carbon piruvates are converted to acetyl-CoA. That is then turned into a 6-carbon citrate. After an electron is added to NAD+ to turn it into NADH, a 5-carbon molecule is formed. Then it turns into a 4-carbon molecule which is then recycled.

The electron transport chain is occurring the whole time that cellular respiration is taking place. It starts with a NADH and a FADH2. Electrons and hydrogen ions are added until the final results are NAD and 2H which yields 32ATP and turns O2 into H2O.

More summaries and resources for teaching or studying Cellular respiration.