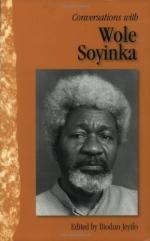 This student essay consists of approximately 2 pages of analysis of The Use of Irony in "The Telephone Conversation".

The Use of Irony in "The Telephone Conversation"

In the beginning of the poem, the speaker starts his "self-confession" when he reveals his skin color to the lady. It is ironic that this is called a self-confession since the poet has done nothing wrong to confess his wrongdoing. It sounds like the speaker is genuinely apologetic and regretful, for he has committed a "sin" of being a dark West African, which is something he was born with and has no control over. Also, after listening to the silence the landlady has responded with, the speaker says "Caught I was, foully." Again, the expression connotes that something wrong has been done by the speaker and he is now being caught committing his crime. By making the speaker feeling guilty and sorry for his skin color, the poet illustrates the silly...

More summaries and resources for teaching or studying Wole Soyinka.

The Use of Irony in "The Telephone Conversation" from BookRags. (c)2021 BookRags, Inc. All rights reserved.