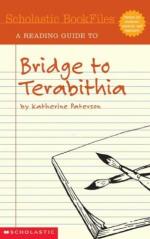 Get The Life of Katherine Paterson from Amazon.com
View the Study Pack

This student essay consists of approximately 2 pages of analysis of The Life of Katherine Paterson.

The Life of Katherine Paterson

During World War II, Paterson's family moved to the U.S., and later lived in Virginia, West Virginia, and North Carolina. For this reason, many of her books take place in Virginia, such as Come Sing, Jimmy Jo. Finally, by eighteen years old, she and the rest of her family had moved eighteen times. Because of this, Katherine Paterson often wrote stories to overcome the loneliness she felt inside.

Paterson attended King College in Bristol, Tennessee, where she enjoyed studying English and American Literature. She received her bachelor's degree in 1954. One year later, Paterson taught at an elementary school in northern Virginia. She then attended the Presbyterian school of Christian Education in Richmond and received her master's degree in 1957. Within the next two years, Paterson did postgraduate work at Naganuma School of the Japanese Language in Kobe, Japan. She earned a second master's degree in 1962 at the Union Theological Seminary in New York City. That same year, she married John Barstow, a Presbyterian Minister. Believe it or not, Katherine Paterson actually began professionally writing in 1964.

Throughout her entire writing career, Paterson wrote many stories and won several awards. Her first book was The Sign of the Chrysanthemum, which she wrote in 1973. Four years later, The Master Puppeteer won a National Book Award. Two of her most famous novels, Bridge to Terabithia and Jacob Have I Loved each won Newberry Medals in 1978 and 1981. The Great Gilly Hopkins won several awards including a 1979 National Book Award and was about a foster child who comes to love her caretaker. As Katherine Paterson got older, her stories took longer for her to write. One of her most unique books was A Midnight Clear, a collection of Christmas stories.

Many of the storylines for Paterson's works reflect upon her experiences as a child, such as The Great Gilly Hopkins, since the foster child is continuously moving. She now lives with her husband in Norfolk, Virginia, and has had four children.

More summaries and resources for teaching or studying Katherine Paterson.

The Life of Katherine Paterson from BookRags. (c)2022 BookRags, Inc. All rights reserved.