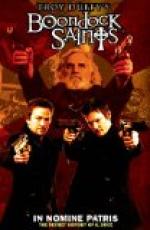 Get "Boondock Saints" from Amazon.com
View the Study Pack

This student essay consists of approximately 4 pages of analysis of "Boondock Saints".

Summary: A review of the Troy Duffy film "Boondock Saints," about two brothers who are commissioned by God to rid the world of evil.
Boondock Saints

"And shepherds we shall be, for Thee, my Lord, for Thee. Power hath descended forth from Thy hand... that our feet may swiftly carry out Thy command. So we shall flow a river forth unto Thee, and teeming with souls shall it ever be, In Nomine Patris, Et Fili, Et Spiritus Sancti."

Two Irish brothers Connor (Sean Patrick Flanery) and Murphy (Norman Reedus) are called by God to rid the world of evil or at least south Boston that is... "Destroy all that which is evil, so that which is good may flourish." The two brothers anointed by God to destroy the evil in the world are called by God after a bar fight with members of the Russian mob. After killing their attackers the brothers turn themselves and are released as heroes. Murphy and Connor see this as...

More summaries and resources for teaching or studying The Boondock Saints.