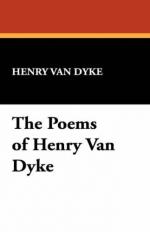 Get "Doors of Daring" by Henry Van Dyke from Amazon.com
View the Study Pack

This student essay consists of approximately 3 pages of analysis of "Doors of Daring" by Henry Van Dyke.

Summary: In his poem "Doors of Daring," Henry Van Dyke stresses the importance of bravery and one's willingness always to take risks, saying "You can never begin to live, until you dare to die." Van Dyke's mixture of dialogue, symbolism, and sensory imagery enable him to deliver this message effectively.
Daniel Tran #32

Henry von Dyke uses his poem, "Doors of Daring," to encourage the reader to be bold, and to remind them that people must risk things that they have to gain more possessions. The author narrates many scenes throughout his work of literature; one of the two is a scene of tall mountains and an ocean. Henry von Dyke tries to help the others be brave through his mixture of dialogue, symbolism, and sensory imagery.

The author tells the reader to be daring in the first second of his poem, "The Doors of Daring." These lines say, "With walls of granite, steep and high, invite the fearless foot to scale." This line describes a scene with a large mountain inviting a person that is brave enough to climb it. When Henry von Dyke writes, "With walls of granite, steep and high," he describes a...