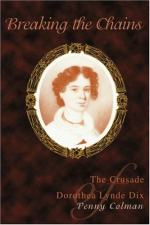 Get Dorothea Dix: A Woman with a Passion for Social Reform from Amazon.com
View the Study Pack

This student essay consists of approximately 6 pages of analysis of Dorothea Dix.

Dorothea Dix: A Woman with a Passion for Social Reform

Summary: Dorothea Dix was a 19th century social reformed who devoted her adult life to the betterment of all people, especially the mentally ill. Through her hard work, 14 states passed bills for the humane treatment of the mentally ill, 32 hospitals were built, 15 schools for the feeble-minded, a school for the blind, and numerous facilities for the training of nurses.
Greene 1

"There are few cases in history where a social movement of such proportions can be attributed to the work of a single individual" (Kovach) At the age of thirty-nine, a woman by the name of Dorothea Dix devoted the rest of her life as an advocate to the humane attitude toward the mentally ill. She traveled the world from state to state visiting each and every prison, almhouse, asylum, orphanage, and hidden hovel documenting everything and anything she saw. After her intricate study of what she had been a witness of she wrote a letter or "memorial" and presented it to a legislator she knew who would present it to each legislature in each state she had studied. Dorothea Dix was the pioneering force in the movement to reform the treatment of the mentally ill in America by devoting her entire life to the betterment of all...

More summaries and resources for teaching or studying Dorothea Dix.

Dorothea Dix: A Woman with a Passion for Social Reform from BookRags. (c)2021 BookRags, Inc. All rights reserved.