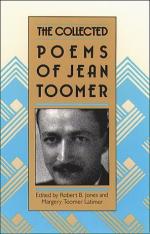 Get Natural Symbolism in "Blood-Burning Moon" from Amazon.com
View the Study Pack

This student essay consists of approximately 7 pages of analysis of Natural Symbolism in "Blood-Burning Moon".

Summary: Jean Toomer uses natural symbolism to show racial and gender conflicts within the text of his short story "Blood-Burning Moon." It seems that he believes these conflicts are a natural occurrence, because of innate differences in makeup between black people and white people, and between men and women.
Racial and Gender Conflict:

According to Toomer, it's only Natural.

There are two real conflicts in Jean Toomer's "Blood-Burning Moon." The first is racial, which can be referenced in the very first sentence, and the second is a gender conflict, that subtly unfolds with the main characters' development. In this essay, I will show how Toomer uses vivid descriptions and comparisons of nature to establish these conflicts, and also to offer an explanation of their origin. He writes to argue that these roles, like the earth, are natural and therefore irrefutable. A close reading of the opening paragraph will reveal the sharp contrast between white and black, as it is described in a metaphor of wood and stone.

It can be argued that the entire story unfolds and closes in the first sentence alone. "Up from the skeleton stone walls, up from the rotting floor boards and the...

More summaries and resources for teaching or studying Jean Toomer.