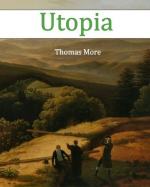 Get Worlds Apart or One in the Same? from Amazon.com
View the Study Pack
Related Topics
The Blithedale Romance

Thomas More
This student essay consists of approximately 2 pages of analysis of Worlds Apart or One in the Same?.

Worlds Apart or One in the Same?

Summary: Utopia is the paradise of one person, their greatest hopes and dreams, made into reality. There is a fine line, however, between perfection and chaos. The hard part is deciding where it is, and when perfection ends and chaos begins. That chaos is dystopia.

Each person has their own personal view of utopia. Utopia is heaven on earth. It is the imagery in which people conjure up to counteract with the depressive or unhappiness in their lives. If life were satisfactory, one would not need to think about utopian images. To conjure up such imaginary worlds in writing is based upon either optimistic or pessimistic perception of what is going on in everyday life. Dystopia, however, is hell on earth. When searching for the ultimate utopia, it is inevitable to end up with dystopia. There are many examples of utopia and dystopia in literature. For example, Ray Bradbury's Fahrenheit 451 is a dystopian novel as well as George Orwell's 1984. They are trying to warn against utopia because of the ultimate and inevitable ending.

Utopia is a pun. It is a contradictory word meaning either "good place" or "no place." In Greek, "eu-topos" means...

More summaries and resources for teaching or studying Utopia.

Worlds Apart or One in the Same? from BookRags. (c)2021 BookRags, Inc. All rights reserved.