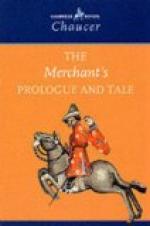 Get "Chaucer Creates Humour in the Merchant's Tale by Satirising Courtly Values." from Amazon.com
View the Study Pack

This student essay consists of approximately 2 pages of analysis of &quot;Chaucer Creates Humour in the Merchant's Tale by Satirising Courtly Values.&quot;.

Summary: The irony used in the poem, allows us to appreciate the truth, see the delusion of the characters, and that creates humour. Chaucer's satire is well valued, and trusted.
At a time when marriages were a matter of alliance and of business, love was considered an irrelevance. Wealthy men, such as January, could choose a beautiful wife purely for her looks and potential as a mother.

Courtly love was part of the chivalric code if behaviour, and conventionally a nobleman who fell in love with a woman of equal or even higher status, would prove his love and devotion by performing noble deeds.

The contrast between these two types of union is implied in the text, which causes iron. The irony makes the text humorous, as readers can appreciate the satire used by Chaucer.

The affair between May and Damyan is a ludicrous parody of courtly love. He is not noble; he does not possess status. He performs no great deeds for his lady, and she is not worthy of his worship. May is a married woman...

More summaries and resources for teaching or studying The Merchant's Prologue and Tale.