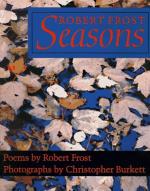 Gabriela Mistral
This student essay consists of approximately 3 pages of analysis of "A Time to Talk".

"A Time to Talk": Friends Come before Work

Summary: The theme of Robert Frost's poem "A Time to Talk" is that friends should come before work. Through the man putting his hoe down to talk with his friend, we see the importance of friendship in an individual's feeling complete in life and in enjoying a secure life.
A Time to Talk

"I don't stand still and look around on all the hills I haven't hoed." This example is the third and fourth sentence of A Time to Talk. In this part, the man is standing on the hills and he sees his friend out on the road. He stands and looks around and says to himself this work won't get any harder and decides that friends are more important than work so he goes for a...

More summaries and resources for teaching or studying Robert Frost.

"A Time to Talk": Friends Come before Work from BookRags. (c)2021 BookRags, Inc. All rights reserved.