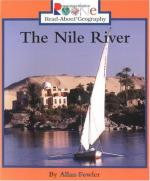 Get The Nile River from Amazon.com
View the Study Pack

This student essay consists of approximately 2 pages of analysis of The Nile River.

Summary: The longest river in the world, the Nile River is an integral part of Egyptian lifestyle, society, and religion. Flowing over 4,000 miles in an unusual northward direction, the Nile has affected Egyptian society in numerous ways.

The Nile River is a land mark to Egyptians past and present, mainly because of its features and variety of uses. The Nile is a great river and flows over four thousand miles before dumping into the Mediterranean Sea. This river has many cataracts, six to be exact which makes the river flow very quickly making it great for boats traveling north. This river it makes hard to travel south and forces Southern travelers to rely on gusts of wind. This river is mostly is mostly of importance of how much silt it creates a rich, natural fertilizer. The Nile River is a useful and amazing river which makes it easy...

More summaries and resources for teaching or studying Nile.