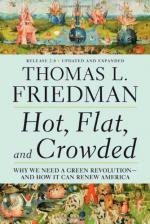 Get The Green Revolution from Amazon.com
View the Study Pack

This student essay consists of approximately 3 pages of analysis of The Green Revolution.

Summary: A brief summary of the Green Revolution that swept the globe in the 1980s. It focuses on the techniques used, the positive and negative effects on certain countries, and some alternatives that are popular today.
Green Revolution

The Green Revolution began during the 1970s and 1980s in an attempt to increase the nutrition in food crops and to make species of food crops more uniform and robust. Scientists developed strains of hybrid plants, such as wheat, rice, and maize that quantitatively produced more food that was of better quality. This research was led by Dr Norman Borlaug in Mexico and others under the sponsorship of the Rockefeller Foundation during the 1960s.

There were several techniques that scientists used to help increase yield and appearance of crops. First, genetic engineering...

More summaries and resources for teaching or studying Green Revolution.