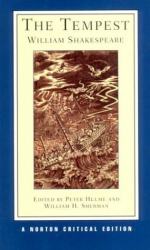 Get "The Tempest" Thesis Paper from Amazon.com
View the Study Pack
View the Lesson Plans
Related Topics
The Winter's Tale
Venus and Adonis

William Shakespeare
This student essay consists of approximately 2 pages of analysis of "The Tempest" Thesis Paper.

Summary: William Shakespeare's play "The Tempest" displays examples of sibling rivalry, hunger for power, and cruelty toward slaves to show one's willingness to betray others, including members of one's own family, where power is involved.
Not many men care about their siblings. A few men would even betray them if they had to. Some would do anything so they could have power. Shakespeare's play, The Tempest, uses sibling rivalry, hunger for power, and cruelty of slaves to show man's betrayal to man with more power.

"Good wombs have borne bad sons"(Act 1, Sc.2, Line 143) says Miranda after she hears of the things Antonio had done in the past. Prospero tells how his own brother, Antonio, went behind his back to remove him from power and claim Prospero's Dukedom for his own. Antonio had worked with Alonso, the king of Naples, to raise an army and drive Prospero into the hands of death. Trying to kill his only brother that he has known for his entire life, Antonio wanted to have the power that Prospero had.

"Draw thy sword. One stroke shall free thee from the tribute which thou payest, and I the king shall love thee"(Act 2, Sc. 1, Line 134-136) says Sebastian. After Ariel sends Gonzalo and Alonso into a deep sleep, Antonio suggests to Sebastian that he should kill his brother Alonso. He explains while his brother sleeps, there is a chance for Sebastian to become the king of Naples by killing him. So Sebastian tries killing Alonso. Even a strong bond as the brotherhood of two men is not strong enough when power is involved.

"In my own cell, till thou didst seek to violate the honor of my child"(Act 1, Sc.2, Line 417-418) says Prospero. Caliban had raped Prospero's only daughter Miranda and he wasn't even disappointed for what he did. Caliban replied by saying "Would't had been done! Thou didst prevent me. I had peopled else this isle with Calibans."(Act 1, Sc.2, Line 419-421) Caliban was saying he wishes it had been done and if Prospero didn't stop him he would have gotten children from Miranda. This description of what Caliban had done to Miranda shows the cruelty of Caliban.

William Shakespeare's play, The Tempest, uses sibling rivalry, hunger for power, and cruelty of slaves to show man's betrayal to man with more power. Many men would betray their family that they have known and loved, just so they could have a glimpse of power.