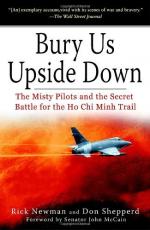 Get Ho Chi Minh from Amazon.com
View the Study Pack

This student essay consists of approximately 2 pages of analysis of Ho Chi Minh.

Ho Chi Minh led millions of Vietnamese to their death during the Vietnam War. He wanted all of Vietnam to be under one flag; his communist flag. He sold his idea to the people who would then sacrifice their own or their families' lives for the cause. He was a good leader for several reasons, one of which is perseverance. He was able to stick things out no matter how bad they got. He was also able to keep the people he led from giving up. His ability to not settle for anything less inspired his followers to do the same.

Another characteristic that he possessed that helped him to be an effective leader was his self confidence. He once told the French that his army could kill one Frenchman for every ten Vietnamese lost, and he would still win. His commander said when asked how long he would have fought the Americans, "Twenty years, maybe 100 - as long as it took to win, regardless of cost."

He was also able to recognize opportunities when they arose. He was able to mobilize forces in an instant, and have them waiting on the Americans when they tried to make a move.

Ho Chi Minh had a clear line of communication with the commanders of his army. This was a large advantage in the war, and is one of the largest factors of the defeat of American troops in Vietnam.

He was a very resourceful person. Most of the Vietnamese army was mal-nutritioned, and had few advanced weapons. Instead, Ho Chi Minh and his commander decided to train the troops how to set traps for the French and Americans. They used what little resources they had to create some of the most gruesome and horrifying booby traps known to man.

I don't believe communism is the best form of government, but as far as his leadership abilities, Ho Chi Minh will always be one of the Worlds best.