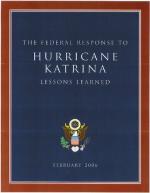 Get Hurricane Katrina from Amazon.com
View the Study Pack

This student essay consists of approximately 3 pages of analysis of Hurricane Katrina.

Hurricanes are tropical cyclones which are huge rotating storms which can cause huge amounts of damage. Hurricanes can reach up to 210 mph with heavy rain and stormy seas. The hurricane begins with a area of heated air over the warm seas in the Tropics. The heated air expands and rises, creating an area of low pressure. The surrounding air moves in towards the low pressure and is made to spin by the earth's rotation.

Areas affected by Hurricane Katrina were Bahamas, South Florida, Louisiana, Mississippi, Alabama, Florida Panhandle and most of eastern North America. The US estimates the death toll to be in the thousands and the damage cost is higher than $200 billion.

The mayor in New Orleans, Ray Nagin ordered an evacuation before...

More summaries and resources for teaching or studying Hurricane Katrina.