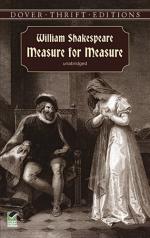 Get Justice in "Measure for Measure" from Amazon.com
View the Study Pack
View the Lesson Plans
Related Topics
The Winter's Tale
Venus and Adonis

William Shakespeare
This student essay consists of approximately 2 pages of analysis of Justice in "Measure for Measure".

Justice in "Measure for Measure"

Summary: Each character in William Shakespeare's "Measure for Measure" has a role in relationship to justice: some serve it, others act on its behlaf, and some are in violation of it. The Duke of Vienna represents legal justice in the play.
One of the key themes we see in Measure for Measure is justice, this idea of an "eye for an eye, tooth for a tooth" derived from the book of Genesis. There is another saying as-well, which goes "an eye for an eye will leave the whole world blind" showing how this equivocal justice, when taken too far, inevitably ends up in disaster.

Each character in the play has their own role in regards to justice, whether they try to serve it, are acting on behalf of it, or are in direct violation of it. The Duke of Vienna is a great example, for as the Duke, he represents justice in a legal sense. He seemingly abandons this responsibility when he leaves Angelo in charge in his "absence." This is not solely to avoid all accountability with ridding the town of sin, but to also bear witness to how Angelo holds himself as a leader. He disguises himself as a friar, which is an interesting choice, seeing as friars tend to represent mercy with a sense of justice. He proceeds to watch as Angelo who clearly shows he lacks the necessary traits to be a true leader. It's not that Angelo isn't strong enough, but contrarily he lacks the tenderness, caring, merciful nature in conjunction with power, that symbolizes a fair and rightful ruler.

At the end of the play, the Duke's arrival really signifies a restoration of justice and mercy to Vienna. Because the Duke realizes that to have quintessential justice it can't stand alone, otherwise the "world ends up blind" or beheaded in this case. It has to be accompanied with fairness, mercy, and truth.

More summaries and resources for teaching or studying Measure for Measure.

Justice in "Measure for Measure" from BookRags. (c)2022 BookRags, Inc. All rights reserved.