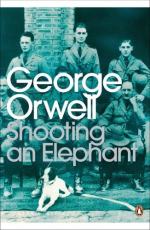 Get Summary of "Shooting an Elephant" from Amazon.com
View the Study Pack
View the Lesson Plans

George Orwell
This student essay consists of approximately 2 pages of analysis of Summary of "Shooting an Elephant".

Summary of "Shooting an Elephant"

Summary: A summary of George Orwell's essay "Shooting an Elephant," which describes an "accident" Orwell came across when he was a policeman in Burma.
The Summary of "Shooting An Elephant"

George Orwell, in the essay, narrated the whole process of killing an outrageous elephant when he was in the post of a police officer in Burma. (One kernel that I have to mention, because it is important for proper understanding of the essay, is that he held the ambivalent feeling for the Burmese. For one thing, he extremely hated the Thyestean imperialism. Second, he was furious about the yellow-faced, evil-spirited Burmese.)

One day, he was informed that an elephant which had obviously lost control under the attack of "must" was ravaging a bazaar, and there was only one felicitous thing to do--stop it at once lest more damage or injury occur. He sent for a rifle, rode on a pony and was on the way to have the elephant that had done great crabbing to public properties, even devitalization.

Without much effort, George, along with a big, big crowd of people, found the elephant, which was peacefully eating like a cow, showing no signs or symptoms of "must." It was clear that George ought not to shoot the elephant. Instead, the mahout should be called for to take it back to the chain it was behooved to belong to. But the crowd behind just would not agree. They were gleeful and anxious to see the elephant having committed felonies get shot. If the gunshot was not fired, it would be jeering and sneering, which would definitely produced more execution than the trample of the prodigious foot of the elephant, pouring all over him. That would make his job even more impossible, also. With the consensus pressing on his nerves, he fired where he thought the darting bullet could kick its bucket. It took about half an hour for the hulk to die, leaving mundane dirt draping down like a shroud for it.

A life of an elephant for not losing face, still being able to stagger, falter, hobble, limp, totter, dodder, or say, scrape his way out. Anyway, fair to George if no guilty conscience haunted him.

Summary of "Shooting an Elephant" from BookRags. (c)2022 BookRags, Inc. All rights reserved.