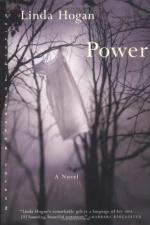 Get What Is Power? from Amazon.com
View the Study Pack

Linda Hogan
This student essay consists of approximately 2 pages of analysis of What Is Power?.

Summary: The definition of the word "power" contains multiple aspects, including energy, ability, control, and influence, that intertwine with each other.
Power

Power is such an interesting subject. The word can describe energy, ability, control and influence. It is used in many contexts, as the following definitions.

Power is the ability to influence others. For example in a debate, one would describe the more influential team as the more "powerful" team. This context of power also exists in history, one example being the case of Adolf Hitler. With his powerful, or influential speeches and propaganda, Hitler was able to brainwash, influence and control the entire nation. He was so powerful to an extent that people followed his demonic deeds without question. History repeated itself in Mao Ze Dong's case. Here again, Mao was so powerful, or influential, that the people canonized him, even up till today.

Power is also the ability to perform actions. Many normal actions in daily life, as simple as eating a sandwich, or lifting up...

More summaries and resources for teaching or studying Power.

What Is Power? from BookRags. (c)2022 BookRags, Inc. All rights reserved.